An apt mural to see on my first venture from the hostel room on my first morning. It was the first few hours I had spent completely by myself in quite some time, and it was warm and sunny and blissful.

A reminder, en route to the Acropolis and its surrounding slopes, that people here are really struggling: Greek, European and refugee communities alike.

I take one look at the crowded Acropolis and settle instead for a spot in the shade, facing away from the city in the warm spring sunshine. In the distance, someone plays “No Woman No Cry” on the keyboard over and over again for tourists making their way up and down the hill, and it floats around in the air. I’m alone for a while, just writing and drinking it all in, until two young men (one pictured above), also attracted by the solitude, drift over for a nap in the sun.

On the drive to Patras, the SatNav refuses to acknowledge that it is in fact a straight road directly from Athens to Patras, and takes us off in Panorama, where the sliproad quickly becomes gravel. Dogs bark as we park the van in the middle of the road, popping out for a quick photo before continuing on our drive. 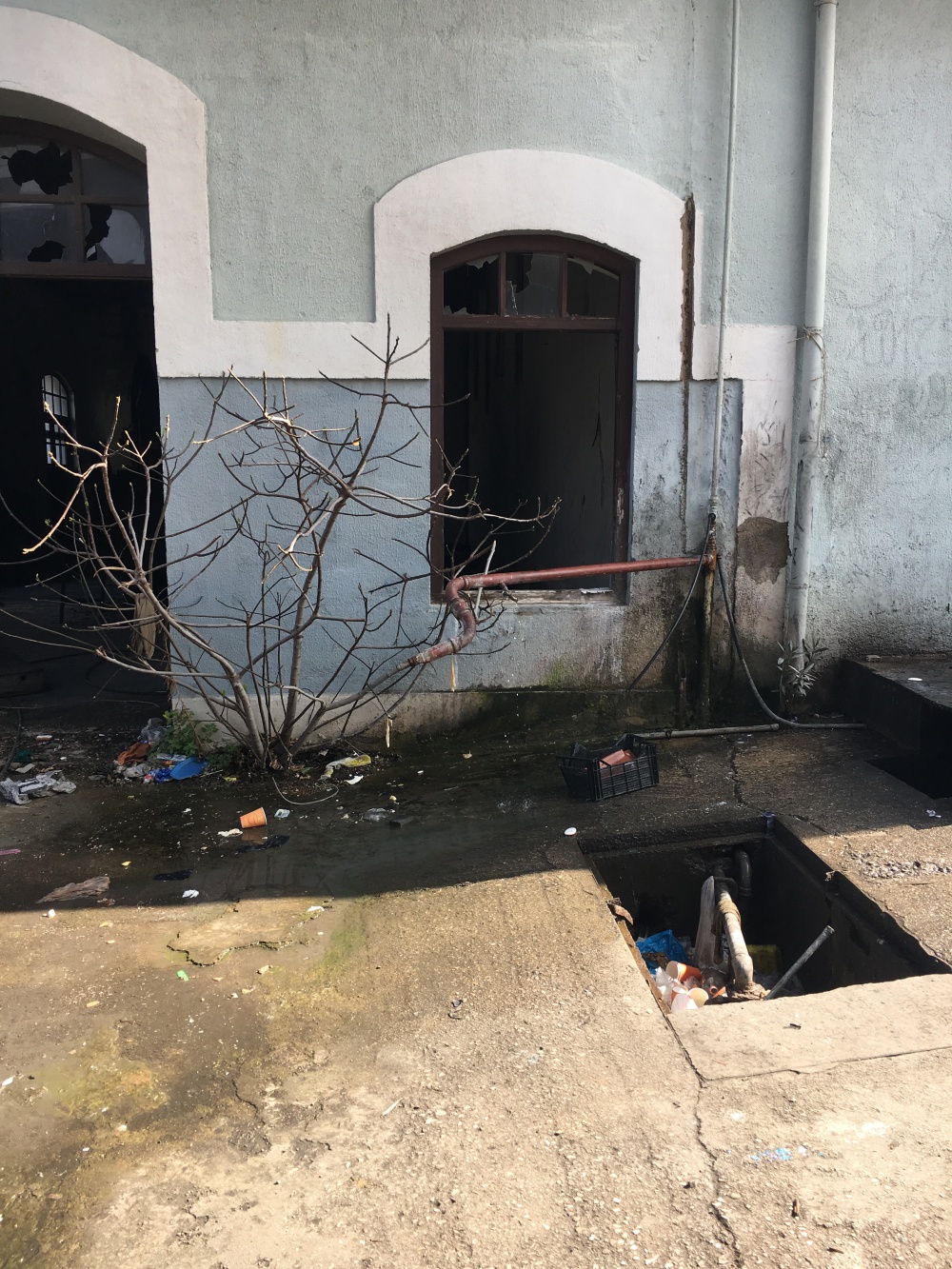 Shower facilities for hundreds of young men sleeping rough in a warehouse in Patras, Greece. For more information on this day, read Patras: the Calais of Greece.

After a hectic day in Patras, I take myself off early the next morning for a wander. More glorious spring sunshine and lots of walking and thinking time.

On Friday evening I pop in on some Syrian friends, and we just chill, watching films and chatting. One is a filmmaker, who stuck around in Syria to record as much as he could  of the situation there before it became too dangerous for him to do so. Some harrowing stories, but they’re his stories to tell. The following morning (well, afternoon) myself and M. head to Eleonas camp, a refugee camp housing up to 2000 people in the outskirts of Athens. It’s a scorcher of a day. We sit with M.’s friends, smoking shisha and drinking endless cups of coffee and tea. In ridiculously British fashion, I am handed a cup of tea and I drink up, thinking “hmmm this is an interesting taste” but continuing anyway out of politeness. Turns out he’d put salt in it accidentally instead of sugar…

Later that evening, when it gets dark, we say our goodbyes and I head towards the centre of the camp. Project Elea are putting on “Eleonas Got Talent”, and it’s the final. Nine utterly adorable kids perform a variety of songs and dances, and the amount of confidence instilled in them is just beautiful to watch. A wonderfully supportive crowd of teenagers cheers enthusiastically for every act, and the winner is thoroughly deserving. At the end, the balloons hanging above are cut down and organised chaos becomes chaos, as kids run around trying to pop the balloons, tripping over ribbons as Despacito blares out in the background. Kids, same everywhere.

We head now to Free Movement Skateboarding‘s 1st birthday party, in an open art space in the centre of the city with incredible views over the Acropolis. Climbing stairs upon stairs to the top, we’re greeted with good music, good people and good views, and dance till the early hours with people from all over the world.

Our hangovers lead us to a secluded little cove in Voúla, and we spend the afternoon swimming, playing football, chatting, singing, and watching the sunset with a group of kids and young adults living in Eleonas camp. On the journey there, we wait at a bus stop, hangovers at full peak, and are approached by a woman who is heavily bandaged with rope tied round her leg. She is clearly high as a kite, and initially harmless, and joins in briefly with a football game. As we wait though, she becomes slowly more confrontational, standing directly behind an American volunteer of Goan descent who is with us, mimicking her and asking “are you not happy in your own country?” As we later try to board the bus, she kicks the youngest kid in our group in the legs, who must have been around 12. Good hangover cure dealing with that, if nothing else. 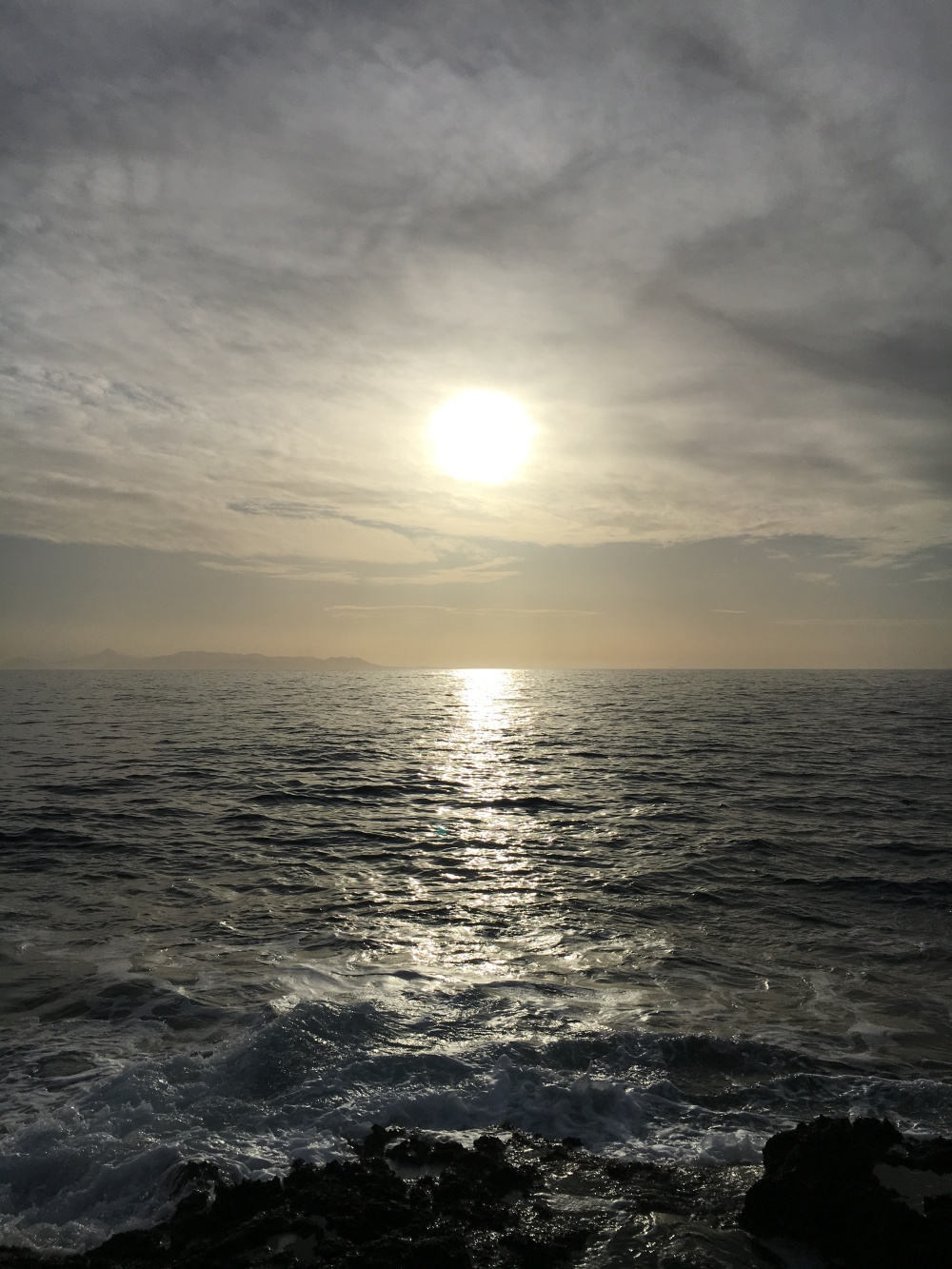 We watch the sun float across the sky, waves crashing into the rocks, and swim in the (still fairly cold, but not too cold) waters, feeling grateful to be here, unaffected by the “Beast from the East” making its mark on the UK and France. Happy happy happy. We listen to music, the kids dance around the fire and it’s warm enough to just wear shorts. 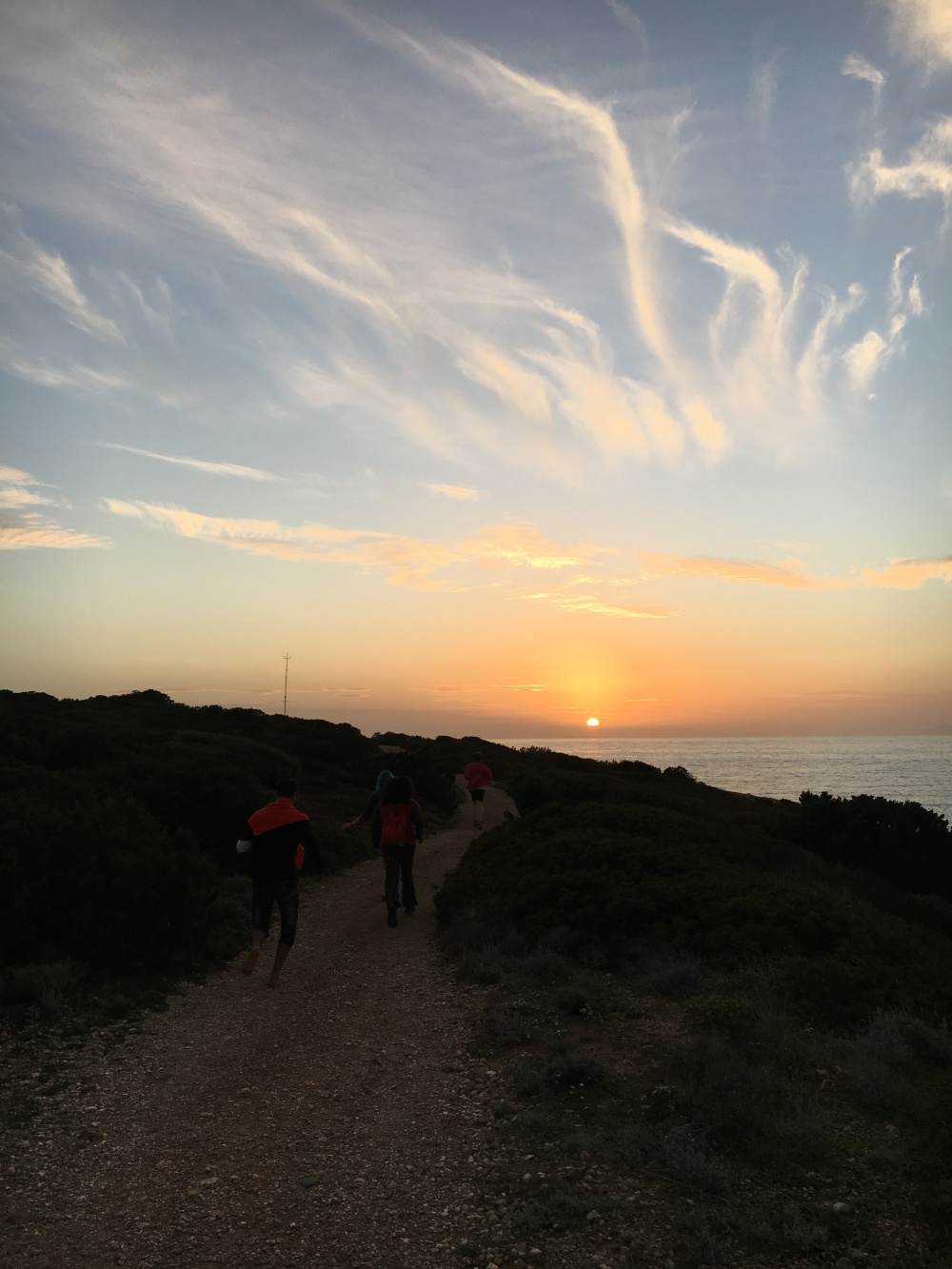 We realise that the sun is setting but we can’t see it properly from our cove – cue bolting it to the end of the rock for a better glimpse. (The sun then fell behind an island on the horizon so we didn’t even get its full glory). We chill for a while longer by the fire until hunger kicks in, and a dreamy little day comes to an end – although getting home involves nearly getting run over by and then sprinting after a tram (and most of us missing it).

A yappy little dog barks at me from his ivory balcony as I wander around the backstreets of Athens, in my absolute element. His owner then comes out and waves sweetly at me. Earlier, a little old lady tottered past me on my walk and waved so genuinely and cheerily at me –  yasou! yasou! – that I couldn’t help but smile.

We are the granddaughters of the witches you weren’t able to burn! Athens is chock-full of graffiti – some good, some not so – but a hell of a lot of it is political. It makes for an extremely interesting city to wander around in, and you can easily lose yourself for hours in the paint and words lining each crumbling street. 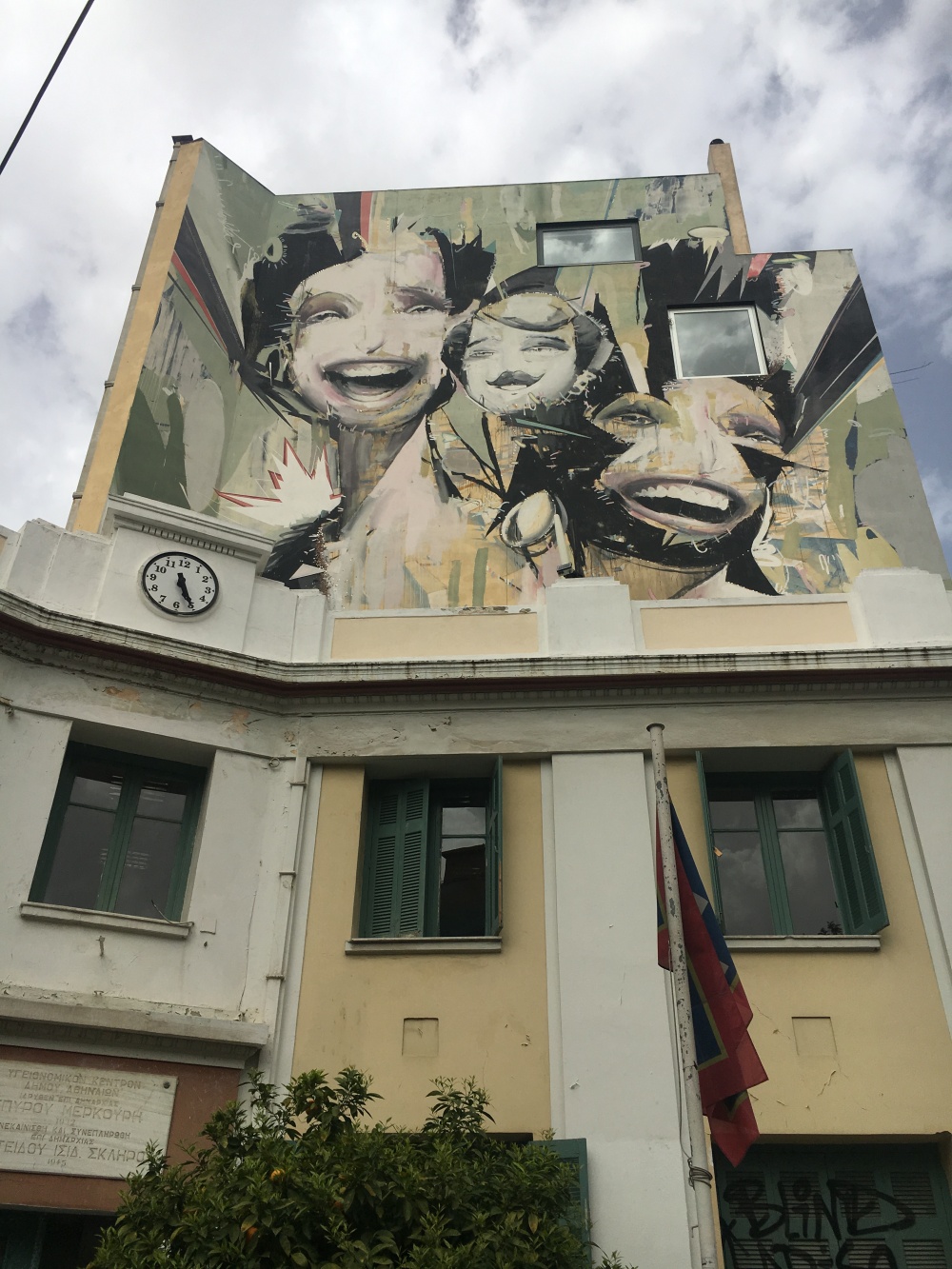 I sit in a cafe after a long walk around the city. Athens has re-energised and invigorated me more than I could have imagined. I’ve said before that it all comes down to just being a friendly face as we veer towards the abyss, but here you can be that friendly face on neutral ground, not as an aid worker but as a fellow human, dancing in a squat together until 4am, or chilling at the beach, or eating dinner in an Afghan restaurant in Exarcheia. For the first time in my life this week I’ve wished I was a photographer, there’s just so much happening that I can’t capture properly on my broken little iPhone, but I’ve done my best to write and capture what I can, and maybe it’s good to just let the rest soak in.

Up until this morning, I haven’t really thought about Calais at all, despite the fact that the weather there has been worse this week than any of the rest of winter, despite keeping regular contact with friends there who are sleeping rough, and despite how emotionally involved I am with Calais in general. I think seeing people sleeping in last week’s weather conditions would have broken me, in all honesty. It’s been a long winter. This past week has shown me a bit of beauty again, and my god I needed it. I’m beyond grateful to be able to do this, knowing how much I’ve taken it for granted before.

All of a sudden, though, I’m sitting in a cafe and Lana del Rey’s “Summertime Sadness” comes on the speakers. The song is designed for you to play on dreamy summer days and then think about them constantly for the rest of the year, and it works. I’m slap bang back in Calais, circa May last year. It’s the beginning of good weather and a group of us are sitting outside a caravan in the sunshine, eating brunch and lounging on blankets and, yes, listening to Lana del Rey. Later in the day I drive to Dunkerque for a food distribution, blasting garage music out of the van as we serve food and chat and arm-wrestle and dance. I can see individual faces, I can feel the hugs, hear the conversations, and it’s all so vivid that I shiver. I look up, and the three laughing ladies from the mural look down at me. Just keep smiling, even if the paint is peeling.

Thanks to everyone who has taken me under their wing this past week or so and shown me some of the best, or perhaps most interesting, that the city has to offer. Particular shout out to the Refugee Info Bus and Help Refugees teams here, I’m beyond glad to be part of this little network. A few more days, and then off to Rome, but I’ll be sad to leave.

Athens, you have stolen my passport, and my wallet, and my heart.